3 Another time Jesus went into the synagogue, and a man with a shrivelled hand was there. 2 Some of them were looking for a reason to accuse Jesus, so they (the Pharisees), watched him closely to see if he would heal him on the Sabbath. 3 Jesus said to the man with the shrivelled hand, “Stand up in front of everyone.”

4 Then Jesus asked them, “Which is lawful on the Sabbath: to do good or to do evil, to save life or to kill?” But they remained silent.

5 He looked around at them in anger and, deeply distressed at their stubborn hearts, said to the man, “Stretch out your hand.” He stretched it out, and his hand was completely restored. 6 Then the Pharisees went out and began to plot with the Herodians how they might kill Jesus.

In his biography of St Francis,  G K Chesterton writes ‘What gave him extraordinary personal power was this; from Pope to beggar, from Sultan to ragged robber no one looked into his burning brown eyes and not know that Francis Bernadone was interested in them, they were valued and taken seriously. He treated the whole mob of people as Kings or Queens’.

And where do you think Francis got an idea like that? Well it’s not difficult just read the Mark passage above. Here was Jesus in the Synagogue surrounded by “important” people yet who does he see and concentrate on? A poor man with a withered hand, who no doubt was trying to keep out of the way and remain inconspicuous. Yet Jesus saw here was a man in need who did not seek him out for healing, but Jesus saw the inner man and how he yearned to be whole.

So Jesus healed him because it was the right thing to do, Jesus did not weigh up the pros and cons of his actions, only what is best for this man? To be healed today or not?

The fact it upset the Pharisees was irrelevant, that they could do harm to Jesus did not matter, all that mattered was the best interests of the man with the withered hand. 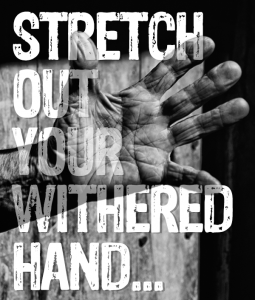 Is this because Jesus did not understand the situation? Far from it!

Dietrich Bonhoffer wrote “Jesus seems not to understand what people are asking. He seems to miss the point of the question and instead addresses the questioner. He is not bound by logical alternatives and in this freedom leaves the laws of man beneath him, and to the Pharisee negation of the law also negates order, piety and belief” (amended).

Jesus cannot be bound by human or earthly considerations, he is of Heaven and it is Heaven’s terms that he relates to, and if you have a problem with that it’s your problem.

Lord God our loving Father, we sometimes fail to understand that you work in eternity you are not bound by the laws of time and space. Help us to appreciate that, and show us how we can walk with you to eternity.