9 Blessed are the peacemakers,
for they will be called children of God.

Abraham Lincoln is reputed to have said that he wanted his epitaph to be “he always pulled a weed and planted a flower when he thought a flower could grow”.

There is in a town called Brandenburg in Kentucky that sits on the Ohio River across from Indiana. Well off the tourist trail it’s the kind of place that gets visited only by those that are lost or who cross the Ohio just so they can say they did so and visited Kentucky (that’s the category Sheila and I were in a couple of years ago). There is a huge memorial standing down by the Ohio there, it hasn’t been there long, it used to stand in Louisville until there was a campaign to have it demolished for it is a memorial to the Dead of the Confederate Army. Louisville council agreed to dismantle it, and after a bit of controversy Brandenburg asked for it to be re-erected in their town. When it was re-erected as well as the original plaques and tablets on it several modern ones were placed around it. These purport to explain why it was there and also give a potted revisionist history of the Civil War explaining how it was all due to Abraham Lincoln’s duplicity and dishonesty, nothing whatsoever to do with slavery or anything else, just the untrustworthiness of a crooked politician on the make.

There is certainly no doubt that when push came to shove Lincoln did not hesitate to go to war, yet so often (outwith Kentucky anyway) he is described as a man who sought to be a peacemaker.

Look again at the verse above.  It does not say peace lover but peacemaker, and history is littered with people who tried to bring peace but knew they had to go to war to achieve that peace. Perhaps one of the greatest effects of First World War was to banish forever the concept of war to end war, but sometimes that is necessary. Lincoln wanted freedom for the enslaved and if that could only be achieved by war then so be it. He tried above all to establish right relationships between all men.

The word translated here as Peace is a word that has the meaning of all living together in a right relationship and that is what Jesus was driving at. 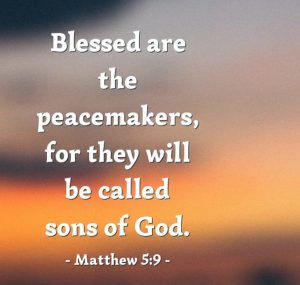 Lord God our loving Father in Heaven, we seek peace and understanding, we shy away from confrontation at times, but help us we pray to stand up for right so we can bring your peace into our lives and the lives of our fellow humans.