60 Then he fell on his knees and cried out, “Lord, do not hold this sin against them.” When he had said this, he fell asleep.

The Manse phone rang as it often does. The minister answered and found himself speaking to a lady he had never met although she had lived in the town all the time he had been minister. She explained that her father who was living with her was fast becoming very frail and had asked her to contact the minister to arrange a visit if that was possible.

In view of the gentleman’s health the minister agreed to call round as soon as he could and shortly afterwards was ringing the doorbell.

The daughter welcomed him in and before taking him into her dad’s bedroom quickly explained that he had come to live with her a few years ago after her mother died, sadly he had suffered a stroke shortly after moving in and had been pretty much housebound since.

Just before she opened his door she said “Oh I hope you don’t think this strange but there is an old armchair beside his bed whatever you do don’t sit in it, he gets very upset if anyone sits on it”. 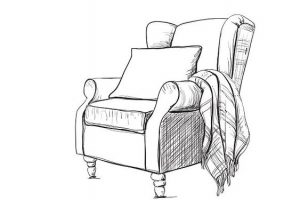 The minister went in, the daughter introduced him then left them to it. As they chatted the old man apologised for not attending church since his arrival. The minister assured him it was OK and he understood how difficult things must have been after his stroke.

“The real tragedy is I could have attended but sadly my daughter lost her faith many years ago and I never felt like asking her to take me as it would have been a bit of a struggle for her”.

They spoke of cabbages and kings and whether pigs had wings as you do in these circumstances. The daughter brought up cups of tea and biscuits which were eaten as the two men became friends. Eventually the minister said he had to go but would visit again, but before going he asked about why no one was allowed to sit in the old armchair, had it been his wife’s favourite chair?

“No” replied the old man “As I said my daughter has no faith but I still needed to pray and talk to Jesus, so I asked for that that old chair of mine be brought up here, and these last few years I’ve turned and looked at it every day and imagined Jesus sitting in it. We then talk just like you and I have, sometimes for hours other times just a few minutes, but that chair has kept me in touch with Jesus all these years”.

Over the next few weeks the minister visited several times to talk, read the Bible and pray with him but he could see he was fading, so it was no surprise when the daughter rang one morning to say her dad had died the night before.

The minister called round to see her to pass on his condolences and start the funeral arrangements. As they spoke over a cup of tea she started to tell of her dad’s last few hours. “I am pleased that in the end it was peaceful but at one point I didn’t think it would be. He got very agitated pulling his bedclothes off and trying to get out of bed, eventually the nurse and I worked out he wanted to sit in that old chair of his, then he became quiet and as his breathing grew lighter a look I suppose you would say was a happy one and a lovely smile came over his face”.

The minister smiled at her “How wonderful for him to die in the arms of Jesus”.

She gave him a strange look and it was a long time after the funeral that he told her what her father had said about his chats with Jesus.

She must have taken the story to heart for she became a very regular member of the congregation throughout the rest of his ministry in that Parish.