12 Rejoice and be glad, because great is your reward in heaven, for in the same way they persecuted the prophets who were before you

In southern California a local drugs baron had a very attractive young wife, and at the start of their relationship she was so blinded by his charisma and generosity to her that she did not see, or chose to ignore, his violence and lawlessness. As time went on she became more and more unhappy as she realized exactly what the man she had married was. The gangster though would not give her any freedom she was in his eyes His and his alone and he would not lose her. The wife started attending a local church where she became aware that despite her former lifestyle God loved her. Eventually she decided she could not live life the way she was any more and told her husband that God had given her the strength to leave him.

He went into a towering rage and began beating and kicking her mercilessly all the time screaming “Where’s your God now? He can’t save you”  until her body lay at his feet broken, bloodied, and almost lifeless .  He called in two of his henchman and told them to take her body and throw it out of a moving truck on the freeway so all could see what happened if they crossed him. The men did as ordered and threw off the back of a speeding pickup truck.

Fortunately the car behind managed to stop before hitting the body, an ambulance was called and by some miracle the woman was still alive. Just. After several weeks and several operations she had healed enough that she could have visitors. One of the first was her husband (mainly because he was afraid she would testify against him).

He came in and looked at her weak and broken body and sneered “See your God has done nothing for you” She smiled and said “Actually he has, he has given me the strength to forgive you”.

To be able to rise above the hatred jealousy and prejudices of this world and look upon others as Christ looks upon us; what greater strength and joy can there be?

The hymn says ‘Through the love of God our saviour all will be well.’ It will be better than well, it will be complete, peaceful, and joyful because God’s love will have triumphed over sin and evil.

Lord God our loving Father in Heaven, as we walk through this life keep our eyes fixed on the glory yet to come. May we bear the trials and tribulations knowing that Heaven awaits, but as you are with us, we may the joys of Heaven here on Earth. 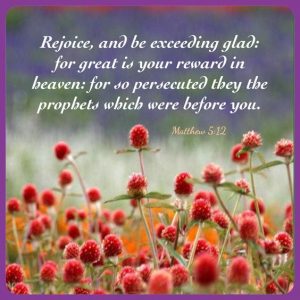