Blessed are the pure in heart,
for they will see God.

Oops here we go again, another of those pesky Greek words that have more than one meaning, and not all easily translated into English.

Firstly, it means clean, specifically that which has been cleaned or washed so is no longer dirty. So perhaps this Beatitude could mean those who have been washed clean by the sacrificial blood of Christ.

But there are other interpretations of the word.

Secondly, the word is used in an agricultural setting for corn which has been winnowed, and all the chaff removed so it is now in its most useful form. It is also used militarily to describe a body of soldiers who have been purged of weak and cowardly men and ineffective or corrupt officers. Like the corn such a unit is at its most useful and is fit for purpose. So perhaps the Beatitude could mean those who have had all their rough edges and impure thoughts rubbed off them.

A third possibility also exists. It can mean unadulterated, as in milk or wine which has not been tampered with and been thinned with water. It also is used to describe gold silver or indeed any metal which is refined and pure and contains no alloy to weaken it. So perhaps it refers to those who can be sure they have no ulterior motive other than a pure love for God.

John Bunyan is said to have responded to someone who congratulated him on delivering a great sermon so well by saying “Yes the Devil already told me that as I came down the pulpit steps.”

Above all the verse calls on us to practice the most rigorous self-examination, “Why did I do that? What was I hoping to achieve when I said so and so? Did I do anything to help when I did that?” 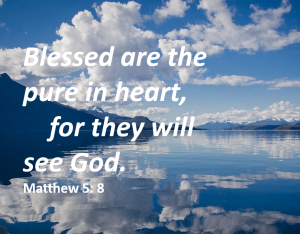 Did we in doing or saying what we did get a clearer view of God? We only see what we are able to see.

Perhaps it’s like Sherlock Holmes and Dr Watson on a camping trip. Wakening, Holmes looks up at the stars and says Watson what do you see. Watson waxes lyrical for several minutes about the depth and complexity of space revealed in the multitude of stars above their heads. Holmes interjects “No my dear Watson what we see is that some rogue has nicked our tent”.

Sheila will tell I’m a terrible person to go round gardens with, as when she sees a nice colourful border of flowers I see the individual plants and how the gardener has placed them and not always to best effect (IMHO that is!).

An expert in antiques sees in a Car Boot Sale lot a lost gem where the next person sees only a collection of old junk.

We see what we are able to see, but when we look inside ourselves let us see what God sees; the good and the trying, so that our hearts may be pure so one day we shall see God.

Lord God our loving Father in Heaven, your son in his purity died for us.  May we in the midst of our sin seek within ourselves that which makes us your children, the purity of the clean heart and mind that can focus on seeking you in everyone and everything we meet.