Anxiety weighs down the heart,
but a kind word cheers it up.

Anxiety weighs down the heart, and for many friends in Malawi there has been much to be anxious about these last fourteen months as various political factions have struggled to resolve the situation there. For those not au fait with Malawian politics here is a brief summary:

In May 2019 they held the normal five yearly tri-partite elections when on a single day votes are cast for Local Councils, Parliament and Presidency. The Council and Parliamentary ones went fine and people were satisfied with the legitimacy of the outcome, not so the Presidential vote. The result was very close with the sitting President winning by just over 1% (39 to 38 from memory) and there were several “irregularities in the declared counts. There were a few riots until the opposition called a halt to demonstrations and went to court where much to everyone’s surprise the court overturned the result saying although the various infractions were not of themselves conclusive, because there were so many the result could not be relied upon to be safe. The Supreme Court agreed and new elections were ordered for last week.

This time the election gave a clear winner 58% to 40% (a third party got the odd 2%) in favour of the opposition candidate. There was great fear that the incumbent would not accept the result leading to chaos and constitutional crisis, but although he did mump and moan he stepped down gracefully.

The anxiety came to nothing and although it’s very early days all seems to be well, and the former combatants are even saying nice things about each other. The incoming President is an ordained Minister and a former lecturer in a Theological Institution so no doubt he is familiar with this Proverb.

It is, though, not easy not to be anxious, and although Jesus tells us to consider the lilies and not worry about tomorrow, we are human and we do. How many in these last few months have noticed they are running a temperature or woken up with a sore throat and spent days worrying whether they had caught Covid 19?  Sadly of course for many they had been infected but I am sure for many many more the symptoms were of something else altogether.

Albert Einstien (I think it was) once said something along the lines of “I spend 75% of my time worrying about possible disasters , 90% of which never happen and the remaining 10% are never as bad as I feared!” 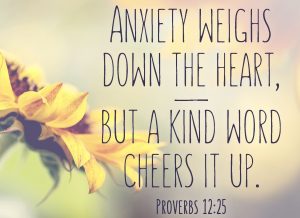 On the other hand when we are anxious how often are we cheered up by a kind word, gesture or just a warm smile?

Last year I was caught up in one of the post election riots in Zomba, fortunately the owner of a café I often lunched in called me in and locked the doors so I witnessed the event from safety. The mob were in full swing at one burning tyres in the road, smashing waste bins, shouting chants and banging drums (the Police were wisely keeping a watching brief and not interfering) just as the middle of the crowd was passing my café refuge, the chanting stopped and the crowd parted leaving a clear path from one side of the main road to the other. Wondering why, I took a look only to seeing coming across the road a wood collector who had come down from the forest with a load of firewood balanced on his head, the mob watched until he was safely on his way then closed ranks and recommenced chanting and shouting!

Was the woodman anxious as he approached? I know not, but I could see in his face the kindness of the mob in letting him pass cheered him up.

Lord God our loving Father, when we are worried help us to trust in you.  When we are anxious send us someone who needs an act of kindness, so we may help them and in so doing forget our troubles.