After the reformation the parish of the minister of Tullichettle covered Comrie, Monzievaird, Crieff and Monzie. The Tullichettle church is now a ruin in the middle of the old burial ground.

In 1805 the parish church of the Church of Scotland was built, almost astride the confluence of Earn and Ruchill, incorporating the tower of an earlier church. In 1843 came the Disruption and in protest the Free Church was founded. For want of a building, services were held on Tom-na-kessog, a knoll between the public hall and the present Comrie Parish Church. 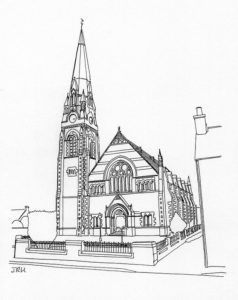 In 1965 the nearby church of Monzievaird and Strowan was closed and the Comrie and Strowan Parish was formed, now renamed Comrie Parish Church.