“I can’t stand your religious meetings.
I’m fed up with your conferences and conventions.
I want nothing to do with your religion projects,
your pretentious slogans and goals.
I’m sick of your fund-raising schemes,
your public relations and image making.
I’ve had all I can take of your noisy ego-music.
When was the last time you sang to me?
Do you know what I want?
I want justice—oceans of it.
I want fairness—rivers of it.
That’s what I want. That’s all I want.

The Text for today is taken from Eugene Peterson’s The Message translation of the Bible. It claims to be a translation in modern language, and it is in some places, though it is a little bit too American in its language but sometimes as in this version of Amos it is very powerful indeed and leaves little doubt as to God’s intentions.

The book of Amos, a man of no great learning a shepherd from Judah he nevertheless prophesied and preached in the Northern Kingdom of Israel. He did not pull his punches laying it on the line as to why God was losing, or indeed had lost patience with his chosen people. He was fed up with their pretence at religion, he saw through their meaningless rituals and lip service observance of the festivals and celebrations.

Finally he confronts them with what they offer as worship and devotion, and here Peterson’s Message Bible hits the nail fairly squarely and unmistakeably on the head. 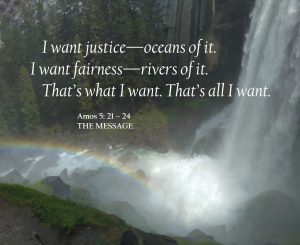 I want, says God, not projects and strap lines and business speak. What he does want is justice for the poor and disadvantaged, he wants fair treatment for all. No taking advantage, no exploitation, no bragging about who has the greater faith.

Just he says be nice to one another, share what you have and live peaceably with your neighbours?

Lord God our loving Father, we seek to worship you as we ought, forgive us if we sometimes forget it is about you and not us.  We come meek and humble knowing we have got it wrong, but knowing you will not forsake us but help us.