5 Blessed are the meek,
for they will inherit the earth.

I once read an article by an old nun, or to be more accurate an old lady who had become a nun late in life. She had in secular life been a very successful business ‘person’. All her life she had not so much fought anti female prejudice as ignored it, as she put it when it got in her way she kicked it out of the way! She was one of those people who wanted to have faith but what had always put her off was the thought of Gentle Jesus meek and mild.  That image was no good to her she did not want, did not a believe a saviour could be, all meek and mild. To take on the world’s ills to take on her a saviour would have to be strong forthright unbeatable and formidable. Attending a civic Church service one day the preacher spoke about the “meekness” of Christ and how what we see as meekness is not what was meant when the AV Bible was produced. Going back to the Greek the word used is that for a point between two extremes between uncontrollable anger and total submission there is the “meek” point at which someone will say enough is enough and stand and fight at that point, the point of righteous anger. Jesus put up with a lot but eventually when he saw what had become of his Father’s house of pray he vented his anger, meekly as the Greek would have it. This was someone our business lady could accept as God and she then commenced on the path that led to her Vows. 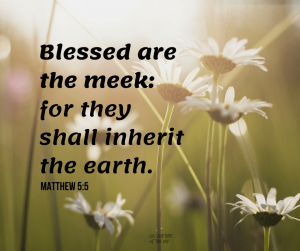 The same word is also used to describe an animal that has been tamed and domesticated. It has not lost its former ferociousness but now it is under control So an alternative translation could be Blessed are those who exercise self control or perhaps as Kipling had it “If you can keep your head when all about you are losing theirs and blaming it on you, If you can trust yourself when all men doubt, but make allowance for their doubting too”.

It is not the business of the Christian to indulge in uncontrollable anger but to use their anger as a spur to effecting change and challenging the injustices of this World so all may live better lives.

As Barclay puts it the meek Christian is the one that is angry at the right time and never at the wrong time.

Well, that is the goal to aim at anyway!