Now when Jesus saw the crowds, he went up on a mountainside and sat down. His disciples came to him, 2 and he began to teach them.

When Jesus needed to speak and teach a large crowd, where did he go? To the Temple in Jerusalem? To the plushest synagogue he could find? No of course not he went up he went up a hill so he could both be seen and heard by the largest number possible.

When John Wesley undertook his evangelical tours the only way he could speak to enough people was to preach from the back of a horse in the open air. Following the Great Disruption of 1843 when the Church of Scotland split the new Church for a long time did not have Churches in which to worship and for many years barns sawmills even public houses were pressed into service but more often than not services were conducted in the open air. Sometimes as in Comrie from a local promontory, even as in Argyll from a boat anchored just off shore (this was because the local Laird refused to allow any Minister on his land). In short anywhere could be and indeed was used as a place of worship until such times as funds could be accrued to build a new church, which hopefully would be bigger and better than the existing Church of the “established” church!

Once the Church was built and the congregation had moved in were the prayers more meaningful, the Readings more profound or the preaching more inspiring? Well they may or may not have been, but whether they were or not was in no way determined by the building. 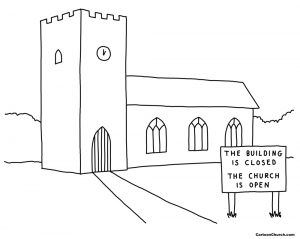 We are all the Church and when our buildings are open again for worship we shall gather once more in community, the fact we will be indoors is just coincidental.

Lord God our loving Father in Heaven, as we approach the end of Lockdown, as we anticipate meeting again in your house, may we remember you are everywhere not just in the building we call Church.  May we be your Church in the shops, in the cafes, in the streets or wherever we are.